Our diets tend to be deficient in macular pigment carotenoids. Hence our macular pigment effectiveness is slowly reduced as we age. Its blue light filtering capacity and anti-oxidative power become weaker. This results in increased risk of photochemical damage to our central vision photoreceptors. (For references to research reports see the last section below).

You can substitute macular pigment with an artificial blue light filter to reduce blue light reaching your retina. In some cases this is a necessary measure because it is reliable and quick. Rebuilding your macular pigment is a slower option with uncertain outcome, however, it has some important advantages:

Hence supplementing our diets with the three macular pigment carotenoids (Lutein, Zeaxanthin and Meso-Zeaxanthin) makes a lot of sense to keep our vision healthy as we age.

With all this in mind, and due to my problems with blue light (see below) I researched macular pigment supplements available in the market and started taking MacuShield one year ago.

Disclaimer: My interest in macular pigment and blue light is due to my problems with light sensitivity (photophobia), discomfort glare, and computer eye strain. I am not a vision scientist.

Disclosure: I would like you to know that if you use some of the links below and purchase a product I earn a small commission at no additional cost to you. To support GLARminY, use commission links. You may also “give” a small percentage of anything you might buy from Amazon by accessing Amazon here (commission link) at any other time. Thanks.

Why I chose MacuShield (MacuHealth) formula

A year ago (and to a large extent still today) MacuShield and MacuHealth were unique in that their active ingredients focus on macular pigment carotenoids: Lutein, Zeaxanthin, and particularly Meso-Zeaxanthin.

MacuShield and MacuHealth both emphasize the importance of Meso-Zeaxanthin, which is in line with most current research (see the last section below for references):

Hence, both MacuShield and MacuHealth contain 10mg of Meso-Zeaxanthin (out of 22mg for all three combined). This is more than any other macular pigment supplement – save EXIR’s Vision Max 20/20 (commission link), that contains the same amount of Meso-Zeaxanthin, more Lutein and Zeaxanthin (20mg and 4mg respectively), in addition to Saffron and Astaxanthin.

MacuHealth is quite expensive, but MacuShield – available from Amazon.UK (commission link) – was and still is a lot cheaper and reasonably priced compared to other similar products.

I started taking MacuShield on May 5, 2016. As recommended by MacuShield, I ingested one softgel capsule per day with a meal (breakfast in my case). Since macular pigment carotenoids are lipid-soluble (not water), I also took a spoonful of omega-3 rich oil with the MacuShield capsule to maximize absorption.

Note that given the minimal sample size (one) the improvements could be attributed to other factors. Moreover, the results are subjective, based on my perception as I don’t have access to equipment necessary to measure Macular Pigment Optical Density (MPOD).

When I started taking MacuShield, I prepared a list glare and visual discomfort circumstances to be able to recognize the changes. The list contained those symptoms which I believed to be caused by my blue light sensitivity because they improved dramatically when I put on my UVEX SCT-orange glasses (commission link) that filter close to 100% of blue light (up to about 530nm). 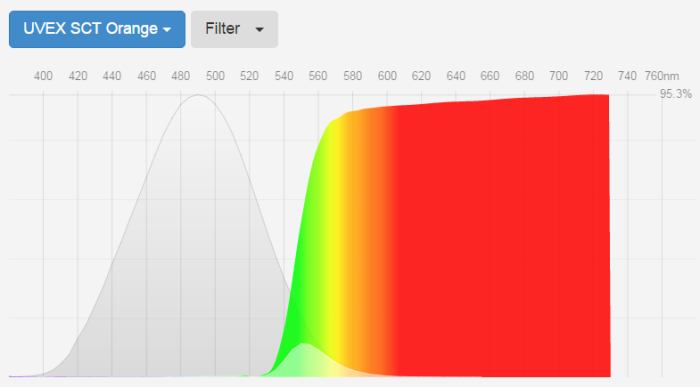 My blue light-related visual strain symptoms and their intensities (on May 4, 2016):
– indoor glare (from windows or artificial lights), very uncomfortable
– night driving glare (from head-lights, tail-lights, blue hi-beam indicator light on the dashboard), very uncomfortable; Note: although many people do it to combat glare, driving at night with blue blocking glasses is not recommended because blue blockers severely reduce night (low-light) vision, which is principally blue light dependent
– day driving glare and reflections (from asphalt, dashboard, and veiling glare), extremely uncomfortable
– computer work (only possible with glare and reflection free lighting; in normal office setting computer I start feeling eye strain in less than half hour)
– reading printed text with natural light (white paper, even when matte, appears glary, better with blue absorbing colors), have to always change angle of the paper such that it does not reflect light directly into my eyes
– reading printed text under artificial lights (similar as with natural light), any amount of reading causes aggravates the dry eyes symptom

After a year of taking MacuShield daily, I have not noticed any negative side effects.

The OH, WOW! improvement with MacuShield

The most obvious improvement I’ve noticed was after four months (September 9, 2016) related to nightdriving glare, where I suffered blue light sensitivity symptoms the most intensely.

This was after having taken approximately 120 capsules (I didn’t keep track of exact quantities but do remember forgetting to take a MacuShield, every once in a while, perhaps once a month).

That evening I was pleasantly surprised to find out that night driving experience was not as glary as it used to be. I was without my orange glasses (commission link) and yet the blue high-beam indicator light on my dashboard and other cars’ head- and tail-lights didn’t bother me nearly as much as they used to!

I would qualify that experience as disturbing, but bearable – similar to how I used to perceive night driving glare 15 or 20 years earlier.

The positive effect has persisted since then. I haven’t perceived any further improvements. I am now able to drive very comfortably with these yellow tinted blue blocking glasses (commission link) from Edge Eyewear that filter much less blue light than the orange tinted ones I’d been using before (compare spectrograms above and below). The extra blue light is extremely important for improved night vision.

Macular pigment supplements build macular pigment gradually over time. Therefore, it is possible that I could have noticed the improvement earlier, had I been exposed to similar circumstances (when days are long, during the summer, I don’t tend to drive at night frequently).

I haven’t noticed such a drastic improvement in any of the remaining light sensitivity and visual discomfort circumstances on my list. However, I believe there has been improvement in most cases (although I am less certain whether MacuShield is the principal cause because there are other anti-glare and anti-blue light measures I’ve taken over the course of this year to increase my visual comfort).

I am now able to spend more time working with a computer (in my special office setting and otherwise), but I attribute that principally to blue blocking glasses (since early September 2016) and not to MacuShield (although it must have helped some).

I believe Macushield has also helped my daylight driving comfort, because now I can use a much weaker blue light filter. Instead of the above mentioned orange glasses that block blue light up to about 530nm I now use yellow tinted glasses that filter that starts letting blue light in at 400nm and reaches ~80% transmission by 500nm.

Eye strain from reading (with natural or artificial light) had been the least acute of my conditions associated with blue light. Perhaps it is for that reason that I haven’t been able to notice any MacuShield-related improvement.

According to most of research reports I’ve read (many are cited in this and this article) one year should be more than enough to rebuild macular pigment optical density to my personal best (most scientific trials are considerably shorter). Thus I am moving to MacuShield “maintenance dosage”, i.e. reduce the daily dosage by half (one capsule every other day).

Here is another experience. It’s by our reader who’s allowed us to share it with you (links and bold added):

about six months ago I e-mailed you to give you my results using the blue-light filters I bought from you and I told you I had begun using Macushield supplements (not the Gold version, 1 capsule a day) in January of this year and than I was going to contact you further on to inform of any benefit I might have gained from using them.

After seven and a half months of daily dosage, I must say the supplements went way beyond my expectations.

It used to be I couldn't use a pc for even an hour and a half in the morning before my eyes began to badly ache, even after having heavily turned down the screen's brightness and color temperature using Iris Pro and wearing an eye filter with 100% protection up to 500nm (Prisma PRO glasses).

Nowadays I can easily use my pc at whichever time of the day, for several consecutive hours with only a mild disturbance at the very end to show for it, which I can prevent entirely by wearing blue light filtering glasses. I still use Iris to set the screen's color temperature and brightness to a level of comfort.

I began noticing the first signs of improvement about three months and a half after beginning my use of Macushield and it has been getting consistently better ever since.

Know that it's been an incredible relief for both my professional life and (especially) my free time and I thank you dearly for drawing to my attention to this supplement.

Given the effectiveness Macushield showed in relieving my problem, it may be that it was caused by an "erosion" of the pigmentation of my macula, the cause of which is unknown to me. I can't say for certain because I didn't undergo any medical examination before beginning to take Macushield.

You're free to use this e-mail as you wish, even post it on your website if you wish to have people know that lutein-meso zeaxanthin-zeaxanthin supplements can be effective in the treatment of blue light induced eye strain.

Will MacuShield or MacuHealth work for you?

It is highly likely that macular pigment supplements will help you improve your macular pigment blue light filtering and anti-oxidative functions. But, you should also know that there is a small chance MacuShield/MacuHealth (or any other eye supplement) won’t work in your case.

Many research reports suggest that macular pigment supplementation has on average positive, statistically significant effects on eye health and vision. Moreover, the inclusion of higher dose of Meso-Zeaxanthin (as is the case with MacuShield and MacuHealth) clearly improves the results when compared to supplements containing only Lutein or only Lutein and Zeaxanthin [Macular pigment response to a supplement containing meso-zeaxanthin, lutein and zeaxanthin (2007). Augmentation of macular pigment following supplementation with all three macular carotenoids: an exploratory study (2010). Lutein, Zeaxanthin and Meso-zeaxanthin Supplementation Associated with Macular Pigment Optical Density (2016). The Impact of Macular Pigment Augmentation on Visual Performance Using Different Carotenoid Formulations (2012)].

But, there are exceptions. All research reports statistics implicitly recognize this fact. Some reports even explicitly state that the responses at individual level are very different. In one trial they even discovered that each eye from the same individual responded very differently to macular pigment supplementation!? This suggests that there is no guarantee that MacuShield (or any other macular pigment supplement) will work for you.

However, given the MacuShield cost, and much higher odds in favor, it seems worth to try your luck, don’t you think?

This site uses Akismet to reduce spam. Learn how your comment data is processed.