Question: I’ve bought a used iPhone SE from a friend. It turns out that looking at its screen causes headaches!? I have seen an ophthalmologist who says there is nothing wrong. A neurologist says it is computer overuse syndrome. Yet I am certain it is looking at iPhone SE screen. Otherwise, there would be no way to have two devices (the SE and iPhone 4S) next to each other where the former causes a migraine headache and the latter doesn’t. Which PC screen light wavelengths could be causing my headache? I am also wondering why I find Tester Filter #7 helpful? (You write on your website that PC screens emit little light in the range that is blocked by Filter #7).

(A broader issue of why light from some PC screens but not others may cause eye strain is also addressed in this comment/answer).

Answer: PC screen light, when displaying white, tends to have a typical spectral power distribution (SPD). However, different screen models may have slightly different SPD. That could be the reason why looking at your iPhone SE screen causes a headache (and why you find relief with Tester Filter #7). Moreover, different people may respond very differently to the same PC screen light SPD – a simple proof of that is that your friend (supposedly) had no problems with the very same iPhone SE screen, nor do/did many, many other users worldwide. Below you may find a possible explanation in comparing SPDs of screen light emitted by different models of iPhone.

Disclaimer: My interest in visual stress is due to my problems with PC screen light sensitivity, discomfort glare, and headaches caused by looking at screens. I am not a vision scientist nor medical doctor. (Also, I am not a smartphone user, so forgive my ignorance of the different makes/models – hopefully, it doesn’t affect the quality of the argument – if so, please, correct me).

Current iPhone models are much brighter, particularly in the blue light region (400-500nm). This trend is likely to have a negative effect on the different symptoms of computer eye strain, including migraine headaches.

The SPD data of different iPhone screens comes from fluxometer. Unfortunately, data for the iPhone SE and 4S screen light emissions are not available. (Based on the trend below, it could, however be assumed that iPhone SE SPD could be similar to that of iPhone 6+ or iPhone 7 since it was released between the two. Following the same logic of release dates, iPhone 4S’ SPD could be closer to that of iPhones 3GS or 5).

The data above also reveals that the peak wavelength tends toward lower wavelengths.

Subsequent to these two trends, blue light intensity, particularly in the more dangerous, lower wavelengths, is also increased. For example, as you can see below, blue light emitted by iPhones 6 and 6+ at 440nm is about 3-times and 3.5-times stronger than that emitted by iPhone 3GS screen: 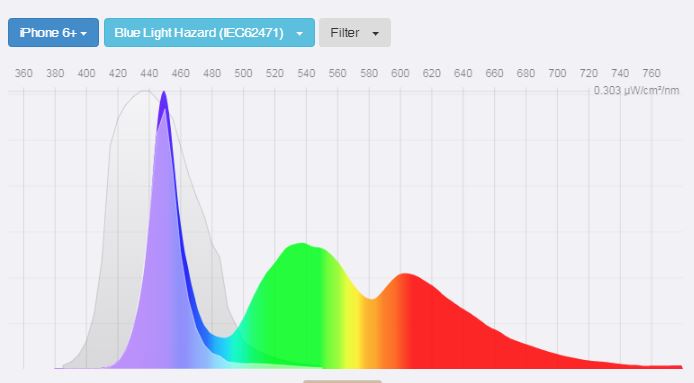 Data for iPhone 7 can be found on DisplayMate (see below). Note it’s blue peak is slightly to the right compared to iPhone 6 and at the same height. The most notable difference is the increase in brightness in the green and particularly red peak.

There is another possible explanation for the worsening of migraine symptoms if iPhone SE model’s SPD were more similar to iPhone 7’s. It could be due to the increase in red light intensity (extreme right peak in the red line above). Remember that red light may also exacerbate migraine headache [ibid.].

However, although the increase in red light intensity on iPhone 7 could prove worse for other migraine sufferers, this is not likely your case since you found relief with Tester Filter 7. As you can see in the spectrogram below, Filter 7 hardly filters any red light. As such it should not make much of a difference in your migraine. Thus it seems safe to conclude that your migraines are not induced by red light. 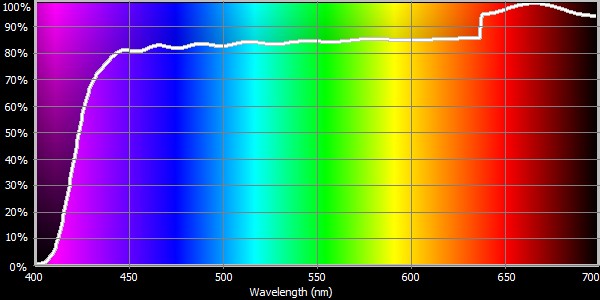 It may also be relevant to point out that, according to fluxometer data, iPhones tend to be among the smartphones that have the highest blue peak and at the lowest wavelengths.

Can looking at different screens
with small variations in SPD
cause big differences in headaches?

It is surprising that such a small difference in SPDs of lights emitted by two different digital displays could be the cause of migraine headaches!? But quite possible – as questions similar to yours are not that uncommon.

However, keep in mind that there are many other reasons why looking into a PC screen light may cause headaches or other eye strain symptoms. So, before investigating further blue light intensity as a possible cause make sure you consider and (where possible) rule-out all other causes.

The explanation of big effect of small differences in SPD gains in credibility due to your experience with Tester Filter #7. Although it’s cutoff is at 400nm and by 450nm its transmission is already at 80% (see above), the small difference Filter #7 makes, could be all it takes for your eyes to feel more comfortable.

Fluxometer is used again to show the effect of Filter 7 on SPD. iPhone 6+ is used for the demonstration. Since fluxometer does not provide data for Tester Filter 7, Gamma Ray glasses filter is used instead. As suggested by this table spectral transmissions of Gamma Ray glasses and Filter 7 are nearly the same).

Remember that iPhone 6+ blue peak was at 450nm with 0.303 µW/cm2. When its SPD is measured after the light emitted by the screen passes through Filter 7 (Gamma Ray glasses) the blue peak is reduced by some 20% (to 0.239 µW/cm2) which is much closer to the intensity of the blue peak on iPhones 6 or 5.

The spectrograms below are for iPhone 6+. The second spectrogram is as measured through the Gamma Ray glasses filter (Tester Filter 7).

Most blue blocking filters sold in the market are similar to Tester Filter 7. Among these many huge names in the optics industry. This may be a reflection of the fact that, like you, many people find relief from PC screen light with such weak filters. For them stronger filters may be an overkill.

Therefore, it might make sense to resist the temptation to go for filters that block 100% of blue light, particularly if eye strain symptoms are not very strong.

Although, testing filters by wearing them remains the most reliable option in figuring out what works best for you.

This site uses Akismet to reduce spam. Learn how your comment data is processed.